Only through nurturing a culture of innovation at scale can our education systems change fast enough to meet the needs of 21st Century learners. IDEX Fellow Chloe Edmundson shares how this belief brought her to Bangalore, and to Quest Alliance.

I am a devout believer in the power of innovation. Innovation has the power to completely shift existing realities both in incremental ways and on immense scales. I strongly believe that one of the most important areas to be harnessing the power of innovation is in our education systems. Our educational systems are simply not built to support the current state of our world. Lack of access to education or using antiquated models means that we are not preparing students to flourish in our rapidly changing world. We are individually and as a planet facing overwhelming issues threatening our very existence, and I believe that the foundation of addressing these issues is through education.

END_OF_DOCUMENT_TOKEN_TO_BE_REPLACED

How often do you get the chance to ask the former President of the United States for advice on your work? It’s an opportunity that Quest Alliance Executive Director Aakash Sethi was given earlier this month, when he was invited by the Obama Foundation to the December 1 Town Hall session in New Delhi.

Joining almost 300 young Indian leaders for discussions around active citizenship, Aakash spoke directly to the president about youth employability in the Indian context. After introducing President Obama to Quest’s work in school dropout prevention and job-readiness, Aakash probed the president on the best way forward in creating young people with 21st Century skills. We were struck by how far the president’s answer, with its focus on the importance of building scalable models, resonated with Quest’s values and larger vision.

Listen to the question and answer at 1 hour 59 minutes in the video above, and read the transcript below.

END_OF_DOCUMENT_TOKEN_TO_BE_REPLACED 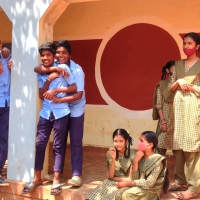